In this article, we will see what Angular CLI is, why it was created, what you can do with it, how to install and how to use it for app development.

What is Angular CLI?

Angular CLI is a Command-Line-Interface that can be used to scaffold and create an application that follows best practices out of the box.

Why Angular CLI was created?

Creating an Angular app from scratch is a difficult and time-consuming task. If you are not using a code-generator tool, every time you create a new Angular app, you have to create a folder structure and add some files, most of which is boiler-plate code. When working in a team, how do you make sure everyone is following the Angular conventions and style guide? How do you create a build optimized for production? How to configure unit and end-to-end tests? To answer all these questions, the Angular team came up with Angular CLI which can help create projects, follow their style-guide, generate code, test, and create optimized builds.

What you can do with Angular CLI:

NodeJS 6.9.0 or higher version is required to use Angular CLI. You can download it from NodeJS website.

To check the version of node, run command following command:

This will install Angular CLI globally on your machine.

After it is installed, you can check the version of the angular CLI:

Depending upon the The result should be something like this: 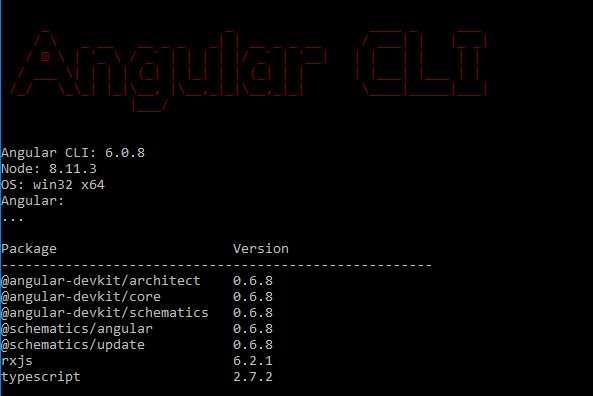 You can create a new Angular app using the following command:

This command creates an Angular app in its folder named my-app. It also runs npm install to get all the packages it needs, generates unit tests and one end-to-end test.

Aliases are specified in parentheses wherever available, you might want to use them to shorten the command.

Go to angular-cli-new page to see all options for the new command.

This command, the app name is test-app, so project files will be created under folder test-app. Routing is configured for you and style file generated will be scss instead of css.

Since --dry-run is mentioned, it won't create any files yet, it just lists the files that will be generated for this command.

If you run this command without --dry-run, the files will be actually generated. So, let's run the command:

To run the application, go into the project folder:

It will start the Angular Live Development server on localhost:4200

Now open any browser and go to localhost:4200, the app should be running: 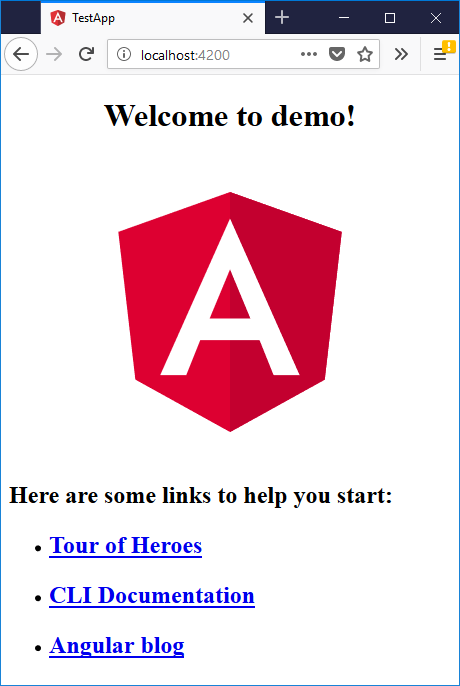 To generate a component with name navbar, run:

Instead of typing the full command, you may use aliases which make the command shorter:

Let say we want to generate a directive my-ad-rotator:

by default, a directive is not generated in a folder, if you like to generate it in a folder, run this instead:

To generate a service with name weather-info:

We can use build to compile the app to an output directory. All builds use bundling and production build adds uglification and tree-shaking.

ng build command without any other parameters is for development, it generates code in the output folder specified in angular.json file, which is dist\test-app in our case.

You can see in the output it generated various js files and corresponding source maps.

In production build:
Source maps are not generated.
Uglification is done.
Tree-Shaking is done.
AOT is performed.
Bundling is done.

--sourcemap(-sm) //If you like to generate source-map in prod. It is on for development by default.

--aot //If you like to do AOT in the development build. It is on for prod by default.

ng serve compiles the code and starts listening on port 4200 by default. It serves the compiled output from memory, which makes it faster and efficient for live reloads.

By default ng serve does not open a browser, use -o switch to serve and open the app in default browser:

All build options are available with ng serve along with some extra options:
--open(-o) //Opens in the default browser, by default ng serve does not open the browser
--port(-p) //Port to listen when serving
--live-reload(-lr) //Reload when changes occur
--ssl //Serve using https
--proxy-config(-pc) //Proxy configuration file

Angular CLI can run the unit tests you have written in spec files. It will execute tests on all *.spec.ts files.

I will run the unit tests and watch for any changes and run again if any change detected.

To read more about Angular CLI, go to the official website and GitHub repo.